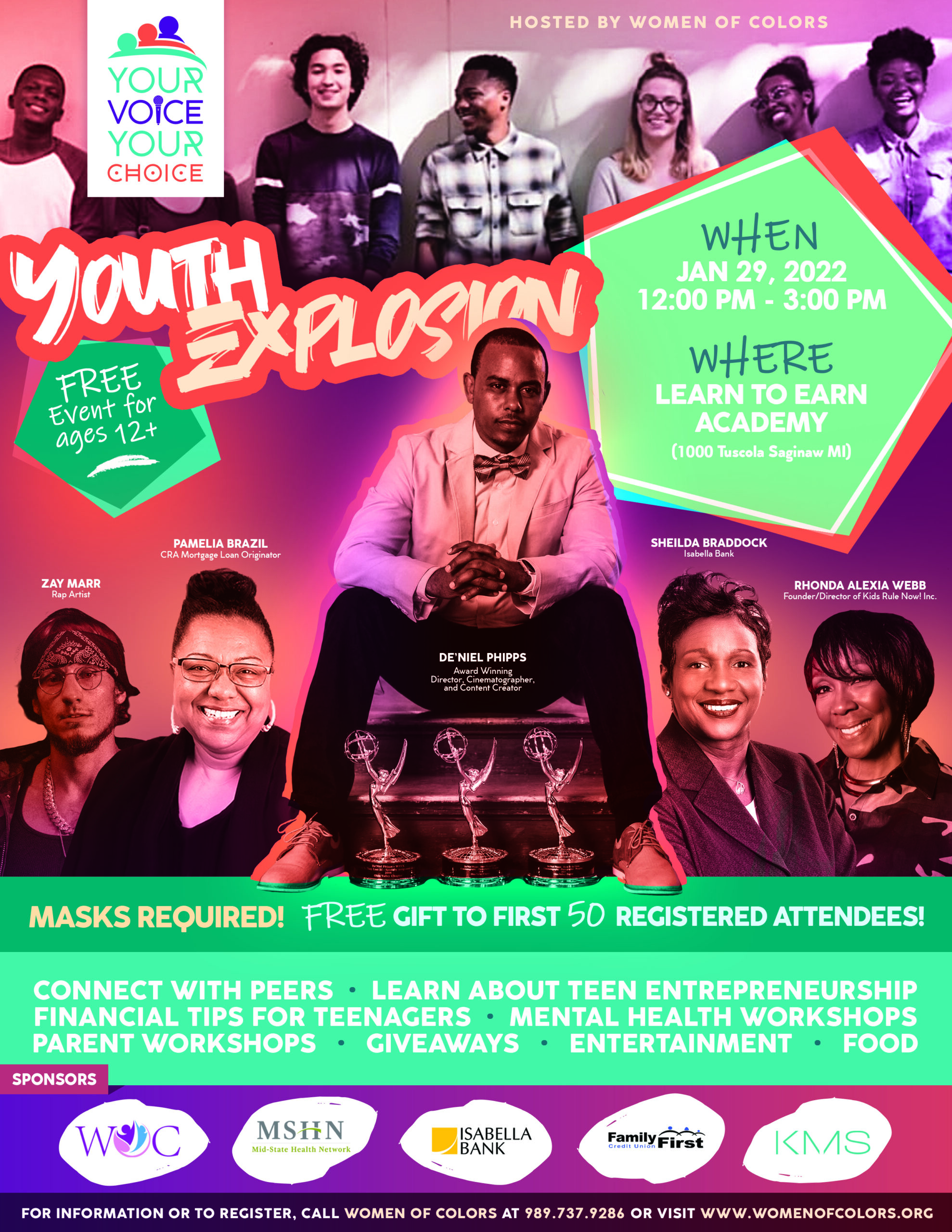 Women of Colors is excited to announce our 2022 Your Voice Your Choice Youth Explosion, a free event for middle and high school students ages 12+. The event will take place on Saturday, January 29 from 12:00 p.m. to 3:00 p.m. at the Learn to Earn Academy in Saginaw.

“The purpose of Your Voice Your Choice is to give youth hope and inspire them to plan for the future,” says Evelyn McGovern, WOC President and Cofounder. Youth who attend will have the opportunity to connect with peers, learn about teen entrepreneurship, build their financial literacy skills, participate in mental health workshops, and much more!

For more information or to register, call Women of Colors at 989-737-9286 or visit www.womenofcolors.org.

Read on to learn about De’Niel Phipps, a special guest at this year’s Your Voice Your Choice event:

Born and raised in Saginaw, MI, De’Niel Phipps’ story did not begin on the Red Carpet. Growing up in one of the most dangerous cities in America, in a home that was both Fatherless and Motherless, De’Niel lost many friends to Homicide and Incarceration. He would sit in his room late at night, daydreaming of a better life for himself and his family. Through his faith, the love of family, and mentors in the community, De’Niel changed his life. It is a story of determination and perseverance.

As a 2-time Telly Award Winner, 6-time Emmy Award Winner, 22-time Emmy nominated Director, Cinematographer, and Content Creator, De’Niel has made a mark in the film and television industry for over 20 years. He was first introduced to the business at age 13, helping to produce his Church’s weekly television program. An opportunity that paved the way to his dreams becoming a reality.

Professionally, De’Niel’s film and television production credits include the 51stDove Awards TBN’s worldwide broadcast special “Carry The Change ”, in which he became the first African American Director of the biggest Christian and Gospel Music Award Show. His national commercial productions include McDonalds, Nationwide Insurance, Miami University, and Goodyear Tire. He has helped produce television programming for MTV, ESPN, ABC, NBC Universal, and a host of other television networks. His studio feature films include Lions Gate film “One for The Money,” Paramount Pictures, “Fun Size,” and the Independent film, “Tomorrow Your Gone.” Adding to his list of credits are numerous short films. “Fin Del Ano,” is the most recognized, which was highlighted at the Sundance Film Festival. De’Niel also produces music videos for national recording artists from various genres.

His list of production credits, combined with years of experience led to him becoming an Adjunct Professor at Miami University. Teaching film production to aspiring filmmakers. He has also pioneered his own Film and Entertainment Camp, teaching youth and young adults, in underserved communities around the country, the ins and outs of the film industry.

De’Niel’s passion to tell stories has continued to drive him to new heights. Always looking for a new challenge to create and market visually. De’Niel has recently published his first book that he is eager to share with the world. He believes that through the arts you can reach, teach, entertain, and inspire.